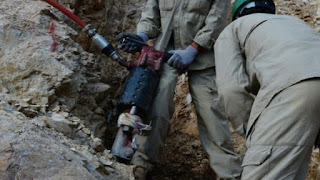 At least 30 people have been killed in the collapse of a gold mine in north-eastern Afghanistan, officials said.

The collapse occurred in the Kohistan district of Badakhshan province. Villagers had reportedly dug a 60m (220ft) deep but makeshift shaft in a river bed to hunt for gold and were caught in its collapse.  Afghanistan has vast resources of minerals but many of the mines are old and poorly maintained, creating severe safety issues. Villagers were reportedly using an excavator at the site when the mine collapsed.

At least seven other people were injured, officials said. Kohistan district chief Rostam Raghi said, “Locals rushed to the scene and managed to rescue only 13 workers. Dozens of others, including some children, died.”