(LOCAL) I Am leaving Lagos better than I met it – Ambode 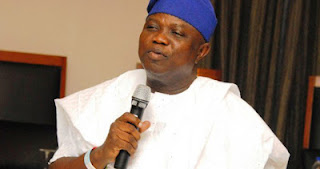 According to him, he meticulously followed the vision embedded in the Lagos State Development Plan, which elapsed 2025, adding that “I am drawing from what has been put there which is also my own dream to make Lagos that financial hub, to make Lagos a safe, secure city, to make it a mega city and also to compare comparatively with all developmental cities.

“So, I met Lagos as the fifth largest economy in Africa, my dream, which I have always said, is that we take Lagos to the third largest economy in Africa. That’s the dream. So, in 10 years, is that doable? I believe strongly that all the parameters that can actually grow the GDP of Lagos are in place and only need to be accelerated. We have done it to a particular stage, we have stabilized it from where we have found it and irrespective of the recession and irrespective of the slow pace of the economy, there has been significant growth in the Lagos economy which is visible.”

In an interview published by Business Day, added: “But what is the most important part of it also, we have been able to create a night economy which was one of my missions. So, one thing that we should be seeing ahead is an economy that compares comparatively with New York; an economy that actually takes that vantage position right now because we know that the next economic development in the whole global system is in Africa and Lagos is just positioned as a trigger because of its natural advantages not necessarily because of our skill-sets; it’s just positioned there and so the competencies and the skill-sets that will drawn in terms of governance and leadership is what should see Lagos as the third largest economy and then compare favourably with cities like Mumbai and everywhere that you go. I mean, you want to see Lagos like a Tokyo but you need a lot of investment in technology.”