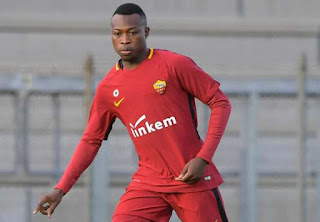 Roma’s Nigerian defender Nura Abdullahi has been forced to retire from football on medical advice at the age of just 21.

The central defender who has a contract with the club until 2021 was initially placed on rest by his club after heart tests in March 2018. According to BBC Sport, the club has agreed to honour his contract and he will now take up a non-playing role with them. Roma are also exploring the idea of enabling him to continue work as a scout or ambassador for the club

He played in Serie B with Spezia and on loan at Perugia from Roma. Abdullahi was a member of the club’s 2015-16 title-winning Primavera (under-19) squad, he was promoted to the first-team group in 2017 but did not make a senior appearance for the three-time Italian champions.