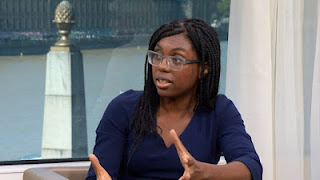 Britain’s Prime Minister Boris Johnson, has appointed Olukemi Olufunto Badenoch, aged 39, as Children and Families Minister, as part of his government reshuffle. Badenoch is a British Conservative politician and Member of Parliament (MP) for Saffron Walden.

She was born in Wimbledon, London to Nigerian parents. Her childhood was spent in Lagos and the United States. She moved to the United Kingdom at the age of 16. She has been the MP for Saffron Walden since 2017 after replacing Nadhim Zawahi.

She once told MPs in Parliament about her own experiences of poverty and how she used to do her homework by candlelight. A software and IT engineer, Badenoch studied systems engineering at Sussex University and also has a law degree. She has worked in the banking sector for Coutts and RBS and is a mother of two.