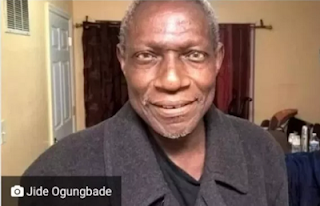 Theatre director, broadcaster and actor, Nicholas Babajide Ogungbade is dead. Ogungbade died on Tuesday, in Lagos after a period of illness, his family announced in a statement signed by Pastor Niyi Gbade and Ayotade Ogungbade.

Born on August 21, 1952 in Minna, Niger State, the native of Akoko-Ikare in Ondo State was a multi-talented artiste, who was also a poet, playwright, singer and music composer. He is best remembered in the theatre circuit as the director of the famous Ajo Productions series of plays, which began in 1983 and culminated in the Ajo Festival of Plays in 1986.

He is survived by children, grandchildren and relatives. Funeral arrangements will be announced later.
on July 13, 2019