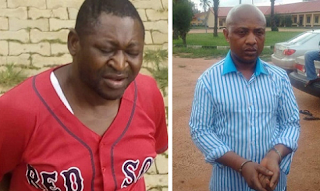 A 46-year-old notorious arms dealer, Godwin Chinyere, who was alleged to have sold most of the firearms, ammunition and rocket launchers used by billionaire kidnapper, Chukwudumeme Owuamadike, A.k.A Evans has been arrested by operatives of the Inspector-General of Police Intelligence Response Team (IRT).

Evans who was arrested on June 2017 in his mansion at the highbrow area of Magodo, Lagos State, by the IRT, led by Deputy Commissioner of Police, Abba Kyari and currently standing trial at the Lagos State High Courts of Igbosere and Ikeja, was said to have mentioned Chinyere at the time of his arrest, as his major arms supplier.

Police sources disclosed that Evans, confessed during his arrest that some of the rocket launchers and Ak-47 rifles, used by members of his gang in blowing up bank security doors and Bullion vans, during robbery and kidnapping operations, were all supplied to him by Chinyere, who he said had contacts with arms dealers in Chad and the Niger Republic.

The source explained that operatives of the IRT launched a manhunt on Chinyere at the time they received the information from Evans, but stated that Chinyere, became elusive and went into hiding as he was aware that Evans has been arrested and would give out information as he was singing like a bird.

A source added that Chinyere came out of hiding recently when he felt that the Evans case has gone to court and the IRT operatives hunting for him may have channelled their energy on other cases of national importance but was unaware that the hunt for him was still on. He was trailed to Asaba Delta State, where he was hiding and was apprehended