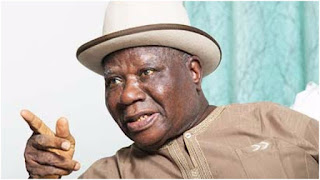 The leader of the Pan Niger Delta Elders Forum (PANDEF), Chief Edwin Clark, has described the suspended RUGA settlement programme for herdsmen across the states of the country as obnoxious, unacceptable and a way to easily destabilise Nigeria as a country. Clark also said that it was unthinkable that anyone should suggest such a policy at this age in Nigeria, insisting that RUGA settlement for herdsmen should finally be discarded and not suspended.

The elder statesmen, who spoke to journalists yesterday in Abuja, said: “Nigeria belongs to all of us. It is true that this country has been depending on one resource alone and that is oil and gas. So, one appreciates the efforts of the federal government to diversify into areas of agriculture, which we have been known for in the past. “Agriculture covers animal husbandry and cropping. But the recent introduction of RUGA is an abomination to the entire people of Nigeria.

“It is obnoxious, it is unacceptable, we cannot remain in a country where various group of people live to make Nigeria since 1914 and today you are introducing some sort of settlement of a particular group of the country in every part of the 36 states simply because you believe you are solving the problem of herdsmen and farmers. That is not the issue.

“You are not solving it. If you want to maintain cattle rearing, it is ranching. That is what operates everywhere in the world. Even in less- civilised countries in Africa. If you go to Brazil, East Africa, ranching is what they are doing. Even our founding fathers in the First Republic established ranching. There was ranch at Obudu, Cross River State, in Ondo State and in the north. “Nobody kicked against it; but for you to introduce settlement as a way of resolving the problem between herdsmen and farmers is unthinkable. Let us go back, we have been living with Fulani and their herds for a very long time even when I was young; they lived with us.

When they were bringing their cows, they would wave their sticks and everybody would give way but today, we see herdsmen armed with Ak-47 all over the country, moving around, killing people, raping women, killing children and so forth, destroying farms and today, not one single one has been arrested, no single one has been caught and his gun removed, and that is the country we belong.

“Government is not interested in checkmating the arm-bearing herdsmen that came from Niger Republic, Libya and other places. They want those people to settle in our midst. It is not the Fulani that go around with cattle that they want to settle. So, I disagree with that project. I was very happy that the vice president for the first time disagreed with the presidency.

Clark further said: “And everybody is now coming out to say that they were not party to the decision. We will not accept it. Whether they suspend it for another 10 years or so, if it comes back, Nigeria will not survive as a country. It is good they withdraw, if they say they have just suspended it and they are bringing it back, no Nigerian will agree to it and that may be the beginning of the disintegration of this country”.