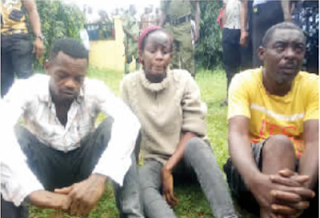 The Force Public Relations Officer, Frank Mba, on Monday paraded one Chukwuemeka Eze for allegedly killing an ex-member of the National Youth Service Corps in Imo State, Lillian Mgbanwu, after raping her.

Mba also paraded two siblings, Chinaza Nwogu and Emeka Ejike, for conniving with one Emmanuel Sunday to kidnap their 88-year-old father, Louis Njoku. The police spokesperson said the arrest of the alleged killer of the ex-corps member was part of the success of the Operation Puff Adder launched nationwide recently by the Inspector-General of Police.

Mba said, “I am at the Imo State Police Command at the instance of the Inspector-General of Police. Here is Chukwuemeka Eze, who murdered an ex-corps member, Lillian Mgbanwu, after raping her. “On July 7, 2019, Eze, who pretended to be insane, took an android phone to the shop of one Ahamefule Onyeka for charging. Onyeka reported the development to the police in Oru West. This suspect was arrested and he confessed that he took away the ex-corps member’s phone after raping her to death.

“This development is pathetic and worrisome, but we promise that justice will be served. “Another pathetic development is that of two siblings, who teamed up with the would-be husband of one of them to abduct their 88-year-old father. “Chinaza, who wants to get married to Emmanuel, teamed up with her brother, Emeka, to kidnap their father, who is an octogenarian, in what I call a triangular crime arrangement.”

According to Mba, Emmanuel wanted to use the money he would realise from the abduction of his would-be father-in-law to pay the daughter’s bride price. Mba added, “The suspects were arrested by the operatives of the Anti-Kidnapping Unit of the command on June 29 following a tip-off in connection with the kidnap of the victim.