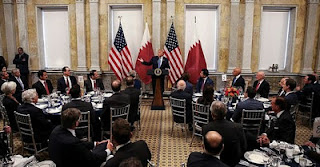 The British ambassador to the US was dis-invited from a lavish White House dinner with Donald Trump last night in a brutal snub as the two countries became embroiled in a full-scale diplomatic spat.

Sir Kim Darroch was barred from the posh event for the Emir of Qatar after the American president said that he will 'refuse to deal' with the ambassador after the leak of cables in which the diplomat labelled Mr Trump 'inept'.

Trump launched a double-pronged attack on Britain's man in Washington and Theresa May's handling of Brexit in a series of explosive tweets as a rift opened up between the two countries, which share a supposed 'special relationship'.

The President also called Mrs May's negotiations with the EU 'a mess' and said he looked forward to welcoming a new Prime Minister once she steps aside. But Downing Street has refused to bend, saying the veteran diplomat continues to have the 'full support' of the Prime Minster.