Why Pepe Is In Demand 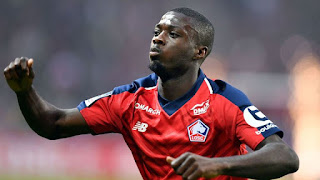 After a standout season in Ligue 1, Lille star Nicolas Pepe has been linked with some of Europe's top clubs - including a big-money move to Manchester United. So why is he in demand? Earlier this week, Lille president Gerard Lopez revealed the future of the in-demand winger is close to being decided, while Pepe stated in February he was open to a move away from the French side.

The pacy, left-footed winger proved he also has plenty of end product last season, scoring 22 times in Ligue 1 and racking up 11 assists as Lille finished second in the table behind Paris St-Germain. While nine of those goals came from the penalty spot, Pepe's trademark finish has become a left-foot finish after cutting in from the right wing.

The highlight of Pepe's season may well have been his goal and two assists in the 5-1 demolition of PSG in April and only PSG's Kylian Mbappe (33 goals) scored more than the Lille ace during that campaign.

Pepe - who went on to help Ivory Coast to the quarter-finals of the Africa Cup of Nations this summer - picked up the club's player of the season award and earned a spot in the Ligue 1 team of the year frontline, alongside Mbappe and his PSG team-mate Neymar.