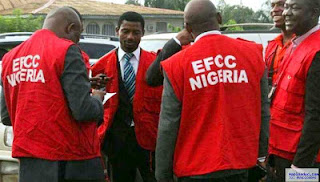 The Economic and Financial Crimes Commission (EFCC) has claimed its operatives were attacked by thugs loyal to former Lagos State Governor, Akinwunmi Ambode, on Tuesday. The EFCC had gone to execute a search warrant on Ambode’s residence in his hometown, Epe.
Supreme Court Strikes Out PDP, Atiku’s Petition Against APC


Wilson Uwujaren, the agency’s Head of Media and Publicity, said in a statement on Tuesday evening that the commission “had obtained valid warrant to conduct search on Ambode’s residences in Park View, Ikoyi and country home in Epe, as part of ongoing investigation of alleged malfeasance.” According to him, the operatives were attacked and prevented from executing the search warrant in Epe, by “irate youths” who injured three officers and damaged the EFCC official vehicle. “The attack was totally unprovoked as the Commission’s operatives were civic and did not molest anybody.

The Commission therefore frowns at the attempt to manipulate the video of the search to create the wrong impression that officers of the agency molested residents at the Epe home of the governor. “It is also not true that the search was an attempt to plant foreign currencies in the home of the former governor,” he added. The agency had earlier denied carrying out a raid on Ambode’s residence, insisting that its operatives were on a legitimate duty.