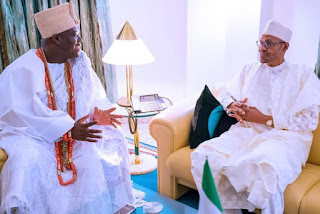 President Buhari and Oba Adeyeye Ogunwusi Ojaja II at the State House on 18th July 2019. Nigeria’s President, Muhammadu Buhari on Wednesday met with traditional rulers from the Southwest geo-political zones of the country.

The monarchs were led by the Ooni of Ife, Oba Adeyeye Ogunwusi and they were at the State House around 12.30pm. The Ooni had earlier in July met with Buhari in Abuja due to insecurity in the Southwest. The paramount ruler had he met with Buhari on behalf of royal fathers in the South-West to make a case for improved security across the region. Ooni noted that the escalating security challenges in the country had led to some persons and groups beating the drums of war.

He clarified that it was not the position of the Yoruba, adding that the region was only interested in improved security of lives and properties. “Everybody is beating the drum of war; we don’t want war. Who can stand war? We want something better for our youths. We should better use them (youths) for something good other than shouting war and anarchy. We don’t want that”.

Ooni, however, told the President to flush out the bad eggs among the Fulani herdsmen, adding that the task was not impossible if Federal Government collaborated with all stakeholders including the traditional rulers in the country. To this, he assured of the president’s commitment to secure all in the country.

“We told the President that, and he is on the same page with us. Politicians should be careful not to blow things out of proportion. “We should make sure things are right and the President has given good directives to security chiefs including the Inspector-General of Police (Mohammed Adamu), to visit all traditional institutions in the South-West”, the respected monarch had said.