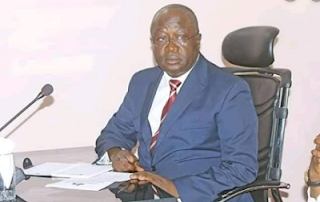 Three policemen and a driver were killed by gunmen in an attack on the convoy of Nasarawa State Deputy Governor, Dr Emmanuel Akabe. The convoy ran into the assailants around Gako hill in Nasarawa Eggon Local Government Area at about 8pm.
Former Gov Orji Kalu Denies That He Cancelled Trip To Spain After Senator Ekweremadu's In Germany


The Deputy Governor was on his way to Abuja for swearing-in of ministers, it was learnt. It was gathered that when the escort commander learnt that there were suspected gunmen on the road, he stopped the convoy and went with two officers and the driver to clear the way.

A source said upon hearing gunshots from an oncoming Hilux van, the gunmen laid ambush for the police officers and the driver. The gunmen were said to have taken away the officers’ rifles after killing them, leaving a magazine behind.

The remains of the slain policemen and the driver have been deposited at the Dalhatu Araf Specialist Hospital in Lafia. State Police spokesman Othman Ismaeel said the Commissioner of Police and other senior officers were at the scene. He said he was yet to be fully briefed on the attack.