I Have Forgiven Those Who Attacked Me – Ekweremadu 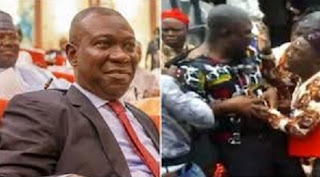 Former Deputy President of the Senate, Ike Ekweremadu, has said that members of the Indigenous Peoples of Biafra, IPOB who attacked him over the weekend in Nuremberg, Germany were under the influence of Alcohol and drugs. Ekweremadu who arrived Abuja yesterday, after the ugly encounter in Germany, disclosed that he was unruffled by the attack on him by members of IPOB, saying that he has forgiven them and put behind him, the incident.
Nigerian Who Swallowed 67 Wraps Of Cocaine Jailed In UK


Nnamdi Kanu places N1m bounty on overseas traveling schedule of South-East governors
President Buhari Urge Ministers-designate To Grasp Opportunity
In a statement by his Media Aide, Uche Anichukwu, Ekweremadu advised Nigerians, including Nigerian and Igbo leaders, to feel free to travel to any part of the world they wish, maintaining that the attitude of his assailants did not represent the dispositions and behaviour of Nigerians in the diaspora. The former President of the Senate said, “I think they were just people, who were misdirected and misguided. I had the feeling they were under the influence of alcohol. They don’t represent the feelings of our people. There is nothing to worry about.

“The organisers, the Igbo in Germany, have written a letter apologising for what happened. Everybody is free to go anywhere because those ones don’t represent the behaviour of Nigerians abroad. “For me, I have moved on. The government and authorities of Germany are free to do whatever they wish about it”, he said.