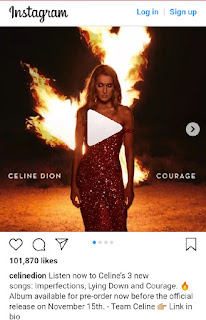 Celine Dion is back to music with three new songs and a world tour loading. The legendary singer on Wednesday released three new songs and kicked off her Courage World Tour. The songs are off her "Courage" album to be released November 15. It's her 12th English language CD and follows her 2013 collection, "Loved Me Back to Life."

In April, Dion announced the new album and a tour to start in Quebec City, Canada, with stops in more than 50 North American cities.  This would be her first tour since her husband-manager René Angélil died of cancer in 2016.