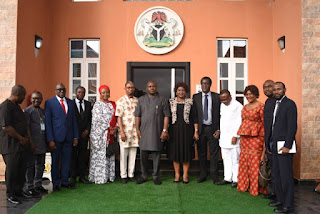 Governor Ihedioha stated this Wednesday, while delivering a goodwill message during the Third Quarter Consultative Forum for States and the Federal Capital Territory held in Owerri.

Represented by the Deputy Governor, Engr. Gerald Irona, the Governor explained that the ongoing Pensions Verification Exercise is aimed at providing accurate database of pensioners in the state. He commended the National Pensions Commission for organizing the Forum, particularly, their choice of Owerri, expressing readiness to partner with the Commission in relevant areas.

“In consonance with our social contract with the good people of Imo State who elected us, we are committed to enthroning good governance, strengthening accountability and transparency in the deployment of Government resources and the delivery of projects which impact positively on the Imo citizenry. To this end, we are not leaving any stone unturned in our holistic approach towards prompt payment of workers’ salaries and pensions. Currently, the verification process, aimed at providing an authentic and verifiable database of pensioners in the State is ongoing, in order to facilitate continuous payment of their terminal entitlements.”

“I must commend the National Pensions Commission for organizing this forum at intermittent periods. It is one of the veritable avenues at fulfilling their statutory mandate of regulating, supervising and ensuring the effective administration of Pension matters in Nigeria.” Earlier in a welcome address, the Acting Director General of the National Pensions Commission, Aisha Dahir-Umar described the approach of the administration of Chief Emeka Ihedioha to pension issues as exemplary, urging other state governments to emulate him.

Represented by the General Manager, Information Communication Technology, Polycarp Ugwu, the, Umar lauded the Governor’s “enthusiasm and commitment” towards the implementation of the Contributory Pension Scheme in the state. The DG described the Forum as a “potent medium for actualizing the Commission’s culture of continuous engagement with critical stakeholders in the states.”

The PENCOM Chief Executive lamented the non-remittance of pension contributions by some states of the federation, describing it as injurious to the scheme. “The Commission is however concerned about the huge sum of un-credited pension contributions of state employees with PFAs, amounting to N4.08 billion as at 31st August 2019.”