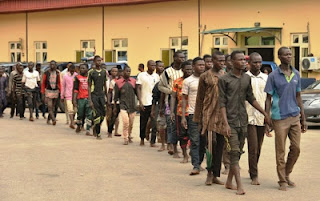 The Jigawa State House of Assembly (JSHA) has expressed displeasure over the reaction of Lagos lawmakers to the arrest and subsequent release of 123 Jigawa indigenes by Lagos State Task Force operatives.

Alhaji Haruna Dangyatin, Member representing Miga Constituency, who brought the matter under “Matters of Urgent Public Interest” on Wednesday, described the reaction of the Lagos Assembly to the incident as “unfortunate”. Dangyatin cited Sections 41, 42, and 43 of the Constitution of the Federal Republic of Nigeria of 1999 (as amended) which guarantees freedom of movement in any part of Nigeria.

“It also provides freedom from discrimination and right to acquire and own movable property anywhere in Nigeria,” the Jigawa lawmaker said. Members of the JSHA asked the Jigawa State Governor, Alhaji Muhammadu Badaru and the Speaker, Alhaji Idris Garba, to table the matter at the Governors’ Forum and the Speakers’ Forum, respectively.

Majority Leader of Lagos State House of Assembly, Sanai Agunbiade, had condemned the release of 123 indigenes of Jigawa arrested by Task Force operatives with their motorcycles on entering the state in a suspicious manner.

The Lagos lawmaker had said at the plenary that the release of the men by the police was “a threat to the security of the state.” The Police Public Relations Officer, Lagos State Command, DSP Bala Elkana, had in a statement said that the men were set free when nothing incriminating was found.