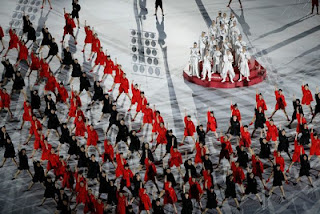 The Rugby World Cup 2019 kicked off with an opening ceremony like no other in host nation Japan. Fans inside the Tokyo stadium were treated to a marvellous spectacle ahead of Japan's match with Russia, which featured everything from traditional dance, to wacky outfits.

World Rugby chairman Sir Bill Beaumont took the stand with Japan's Crown Prince Fumihito to address the crowd, where he commended the first Rugby World Cup to be held in Asia. "You can all be very proud tonight," Beaumont said.  "You have made this real. Over the next few weeks we will experience the very best of rugby, the very best of fans, and excitement on and off the field."

"I know Japan will be the most welcoming of hosts, the best hosts. "To the teams - this is your moment to shine on the greatest stage," he added, before calling on them to inspire, and promote rugby's values of: integrity, solidarity, respect, discipline and passion.