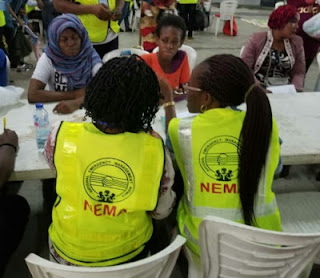 The Coordinator, NEMA Lagos Territorial Office, Alhaji Abubakar Muhammed, received the returnees on behalf of the Federal Government at the Cargo Wing of the Murtala Muhammed International Airport, Lagos. Muhammed told newsmen that the returnees arrived aboard a chartered Al Buraq Air plane with flight number UZ389/24 and registration 5A-DMG, at 4:32 p.m.

He said their return was facilitated by the European Union and the International Organisation for Migration in a collaborative project that had seen some 15,000 stranded Nigerians being brought back since 2017 when the exercise started. “At the end of the profiling of the returnees, there were 42 women, 19 female children and five female infants. Also brought back were 55 men, 14 male children and six male infants,” Muhammed said.