Bangladesh sentences 16 to death for killing teenager in harassment case 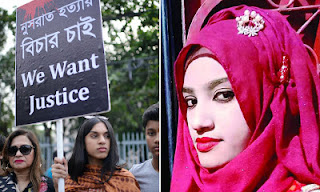 The principal of a religious school in Bangladesh was among 16 people sentenced to death on Thursday for the murder of a teenage girl who refused to withdraw a complaint of sexual harassment against him, the public prosecutor said.

The killers poured kerosene over Nusrat Jahan, 18, and set her on fire on the roof of her madrasa in April in the southeastern district of Feni. “We are happy with the judgement,” public prosecutor Hafez Ahmed told reporters after the court verdict. Police said in their chargesheet the murder was carried out at the principal’s order.

Jahan’s death sparked public outrage and mass demonstrations calling for her killers to be punished. She had faced pressure to withdraw a complaint to police in March accusing the school principal of attempted rape and also the case, her family said. Prime Minister Sheikh Hasina had met her family and vowed to bring the killers to justice.