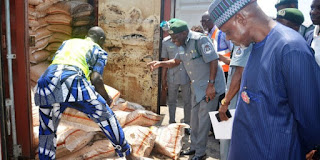 Nigerian Customs Service (NCS), Tin Can Island Command has seized 54 containers laden with various contrabands, including expired rice and banned drugs. Thirty-three of the containers were loaded with foreign rice. The NCS put the value of the seizure at N2.713 billion. The containers comprise 15 40ft containers and 39 20ft containers.

The rice consignment, for instance, Master Rice has its date of packaging and expiration as May 2016 and March 2019 respectively; Fragrant rice, packaged in October, 2018, with an expiration date on October, 2019, where both imported from Thailand; while Jasmine rice which was packaged on September, 2018, with expiration date on September, 2020, was imported from China. The impounded rice, bagged in 50kg sacks, had the labels of Nigerian companies. The Master Rice bags have the label of Masters Energy Commodities Trading Limited, with its address as 31A, Remi Fani Kayode Street, GRA, Ikeja.

Another consignment tagged: ‘Jasmine Rice’, had the inscription “packed for Yumfei International Trading Company Limited, with address as 103, Ebittu Ukiwe Street, Jabi, Abuja. The Nation observed that one of the 40ft containers was loaded with fresh, empty 50kg bags with new dates inscribed on it. The implication is that these empty bags were to be used in re-bagging of the expired rice.

Customs Comptroller-General Col. Hameed Ibrahim Ali, who briefed reporters at the Customs Examination Ground of the Tin Can Island Port, listed other seized items as: one container of rice concealed with spare parts, 11 containers of unregistered pharmaceutical products, two containers of used tyres, one container of used clothing and four containers of refined vegetable oil in retail packs.

He said the containers were seized in line with the provisions of Customs and Excise Management Act (CEMA) Cap C45 LFN 2004 sections 46 and 161. The Customs boss added that efforts are on to arrest the persons behind the smuggling going by the various addresses on the bags of rice and contacts on importation documents.

Col Ali said: “One significant thing about this seizure is that all the rice has expired or about to expire. Also remarkable is the seizure of variants and unregistered performance enhancing drugs among the pharmaceutical.