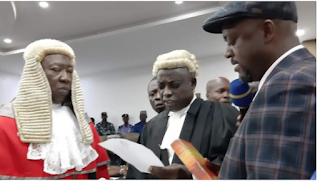 Edward Onoja, running mate of Yahaya Bello, governor of Kogi, in the November 16 governorship election, has been sworn in as the deputy governor of the state. The swearing-in ceremony held at the Kogi government house on Monday. The ceremony is sequel to his confirmation by the Kogi state house of assembly.

Bello had sent the name of Onoja, his former chief of staff, to the assembly following the removal of Simon Achuba, his former deputy. The impeachment panel set up to probe Achuba had said it could not prove the allegations against him, faulting his removal.

Achuba and Bello have been at loggerheads. In July, the former deputy governor accused the governor of withholding his salaries and allowances to the tune of N819 million.

“The statutory allocations approved for the office of the deputy governor have been withheld by the State government since 2017,” a letter he written to Bello by his lawyers had read.

“The accumulated statutory allocations the state government has withheld is N819,709,980.00 (Eight Hundred And Nineteen Million Seven Hundred And Nine Thousand, Nine Hundred And Eighty Thousand Naira) which includes travel allowances, hotel bills, pledges and outstanding monthly Impress and salaries due to our client as the Deputy Governor of Kogi state.”