Kanye West reveals he predicts he will be US President 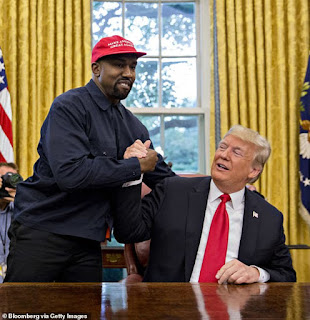 Kanye West has made some bold claims including that he predicts that he will be US President in an explosive new interview.

'There were times where I was asking people to not have premarital sex while they were working. 'I know that’s one where The Shade Room gonna be like, "what you mean don’t have premarital sex? you better turn that Meg The Stallion on right now." But seriously there’s times where I went to people that were working on other projects and said 'could you just work and focus on this?'

Kanye also revealed he attempted to bury the hatchet with Drake, and even left his phone number at the rapper's house. He also met Donald Trump at Trump Tower in New York City back in December 2016 while he was president elect. He wasn't done there as he called himself 'undoubtedly the greatest human artist of all time' before going into more detail about his controversial past with Trump.

West explained: 'For the greatest artist in human existence to put a red hat on was God’s practical joke to all liberals. Like, 'No! Not Kanye!"' He later shed even more light on his political leanings as he said he is 'the most liberal.'