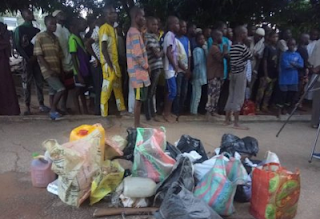 The State Commissioner of Police, Kayode Egbetokun made this known on Thursday in Ilorin while briefing reporters. Mr Egbetokun said the command acted on a tipoff and raided the centre where 103 males and five females were discovered unlawfully detained.

“Some of the victims were observed to have some forms of infections and diseases and were not treated while some others were mentally ill. “Some of them during interview claim they were brought to the centre by their parents,” said the CP. He said investigation was ongoing and that the police command would take care of the victims until their parents come to fetch them. One of the victims, Waliyu Ali, said his parents took him there because he was addicted to marijuana.

He added that his parents believed that the place was a rehabilitation centre and that he would stop smoking marijuana after spending some months there. Another victim, Abdulazeez Korede, said “my parents brought me there because I am a drug addict and they want to stop me from taking hard drug. “But to my surprise, I was chained and beaten up mercilessly and taken under ground where other guys like me were kept when my parents left.

“I was kept in a dungeon for four months where there was no sunlight or window and no proper food.” Another inmate, Tope Owonifari, said he was taken there because he was troublesome and used to smoke cigarette. He added that despite the founder collecting N15,000 monthly food allowance from his parents, “I was not given proper meal”.