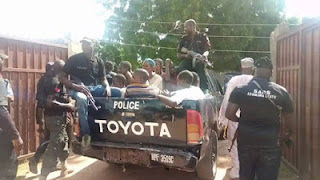 The police in Adamawa State have arrested a man and his three sons for allegedly operating an illegal rehabilitation home where 13 adults and two teenagers were found bound in chains.

The policemen who rescued the 15 said they acted on intelligence report.  Police found the victims in a one-room apartment which is said not to be suitable for three persons considering the harsh weather condition of the state. DSP Suleiman Nguroje, who disclosed this in Yola on Wednesday, said the 15 victims were found in dehumanising conditions.

He also said that some of the victims had spent the past year in that condition. It was revealed that except for two teens all the other victims were adults within the age bracket of 22 and 46 years. Nguroje said, “They were being chained, humiliated, victimised, subjected to unnecessary torture. They were in chains for 24 hours without feeding and medication.”

Nguroje explained that the police has already started investigations into the activities of the four suspects. The victims who have narrated their ordeals to the police following their rescue said they were fed only once in 24 hours. One victim aged 42 said he had been in the centre for the last one year.