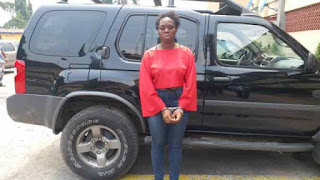 The police in Lagos state have arrested a 23-year-old girl, Deborah Nwachukwu, for stealing a Toyota jeep, cash and items worth N1 million in Lagos. The Lagos State Police Public Relations Officer (PPRO), DSP Bala Elkana said this in a Statement on Sunday according to Blueprint.NG.
Deborah hails from Abia state and resided at No. 19 Irewale Street, Ipade Area, Lagos.

According to Elkana , the victim stole the Toyota Jeep, two Samsung S10, wrist watch, designer perfume and some cash from one Mr Patrick at MKO Street, off Toyin Street, Ikeja. “ Patrick (the complainant) met Nwachukwu at Shoprite in Ikeja selling some cleaning products for a company around the shopping mall where he invited her to help render home service in cleaning his house for him.

“They agreed for N20,000 as payment for her service. However, Nwachukwu said that the invitation was not just for cleaning of the house but for s#xual reasons. “After the s3xual intercourse, she noticed that the complainant was asleep and she quickly took his exotic things, some cash and his Jeep and escaped from the house after locking him up in the room.
“The suspect has been charged to court and remanded in correctional custody ,” the DSP said.