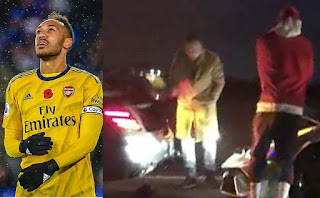 Arsenal's new captain, Pierre-Emerick Aubameyang was involved in a crash hours before their 2 - 0 defeat to Leicester City on Saturday, November 9.

The Gabonese striker, 30, reportedly crashed his £270,000 silver Lamborghini Aventador on the M25 near Potters Bar, Hertfordshire while driving back from training on Friday evening. (Nov.8)

In footage obtained by The Sun, Aubameyang was filmed standing next to his supercar as another driver inspected the damage to his vehicle following the motorway crash.

'It was rush-hour so cars were not going fast and travelling around them,' an onlooker is reported to have told The Sun. It wasn't reported if anyone suffered any injuries from the incident. But hours after the motorway crash, Aubameyang played in Arsenal's 2 - 0 defeat to Leicester.