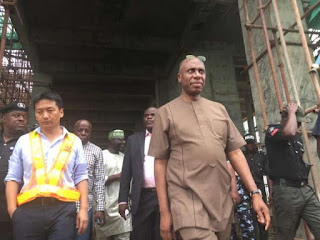 The Federal Government has assured Nigerians that the Lagos-Ibadan Railway project will be completed by April 2020, just as it has fixed next week as the commencement date for the test-run of the train.

Minister of Transportation Chibuike Rotimi Amaechi, who made the disclosure shortly after inspecting the project site in Ibadan, the Oyo State Capital, expressed optimism about achieving the completion deadline judging by the pace at which contractors are currently working, he said.

According to him; “We are no longer giving ourselves the time, the contractors are the ones giving us time. By April next year, we will be out of this place. There is huge improvement compared to the last time we were here. The contractors have assured us that by December 20, this year, the laying of tracks would have gotten to Ibadan Station.

“This means that the focus will no longer be on the tracks but on the completion of the stations, communication and signalling and once we achieve this it means we are out of Ibadan,” he said.