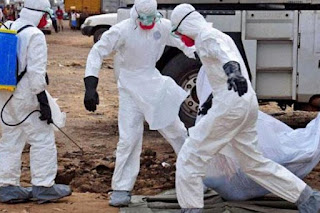 The death toll from the ongoing Ebola outbreak in the Democratic Republic of Congo (DRC) has climbed to 2,209, the African Union said on Thursday. The AU said the figure represented the situation as of December 8.

The country had registered an additional 59 new human causalities from the 2,150 deaths that were reported on October 13. The AU, which provides support to continental and international efforts against the epidemic through its specialised agency — Africa Centres for Disease Control and Prevention (Africa CDC), also stated that 3,327 Ebola cases were reported at the time. The AU added that some 1,087 people recovered from the disease and the overall Ebola fatality ratio remained at 67 percent.

Last week, the AU Commission hosted a resource mobilisation event —  “Africa against Ebola Private Sector and Partner Forum” — to solicit resources from AU member states. It urged “other partners to support efforts to end the Ebola virus disease in DRC and contain it from spreading.” During the event, more than $55 million was pledged along with other in-kind supports and assistance to Africa’s fight against Ebola. The current Ebola outbreak in the DRC was declared on August 1, 2018, and the outbreak was eventually declared a public health emergency of international concern by the World Health Organisation (WHO) in August. (NAN)