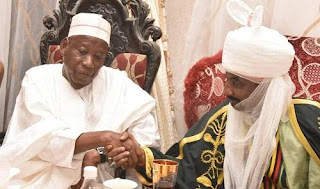 Governor Abdullahi Umar Ganduje of Kano state has laid to rest speculations that he will strip Emir of Kano Muhammadu Sanusi of his position under the new Emirate rules as he appoints the Emir as Chairman State Emirate Council.

Ganduje said he made the appointment from the powers invested on him by Sections 4 (2) (g) and Section 5((1) (2) of the Kano State Emirate Councils Law 2019. Additional four first-class Emirs of Bichi, Rano, Karaye and Gaya, Alhaji Aminu Ado Bayero, Alhaji Dr. Tafida Abubakar (Autan Bawo), Alhaji Dr. Ibrahim Abubakar II and Alhaji Ibrahim Abdulkadir, were appointed as automatic members of the Council, as enshrined in the State Emirate Council Law.

Others according to the Section comprises at least Ten (10) Kingmakers, 2 each from the Five (5) Emirates mentioned under Section 3(1) of the Law, Chief Imam of each Emirate. Other members include a representative of the Business Community from each Emirate to be appointed by the Governor, as the names of Alhaji Dalhat Al-Hamsad and Alhaji Auwalu Abdullahi Rano are appointed by the Governor, as two of them.

The appointment is with effect from Monday, the 9th Day of December 2019. It is also directed that the Chairman shall immediately summon the inaugural meeting of the Council following the provisions of the Law.