I won’t favour any politician in 2023, President Buahri birthday promise 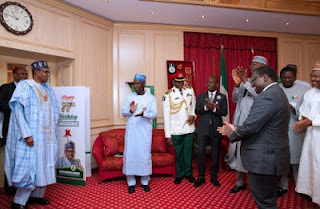 Nigeria’s President, Muhammadu Buhari has fired salvo at politicians waiting for him to support them in 2023, vowing that he will never favour any politician as to bend the rule of the game.

As his Secretary to Federal Government, Boss Mustapha and other aides presented a birthday card to him at the State House, Abuja, the retired major general chose the moment to uncover what had been in his mind. According to him, politicians who want to vie for the 2023 general elections must work for it and earn the trust of the people.

He said he would not bend the rule for anybody against the popular wish of the Nigerian masses. Buhari added that members of the All Progressives Congress, APC, must work hard as he would not allow anyone to use his name to canvass for electoral votes.