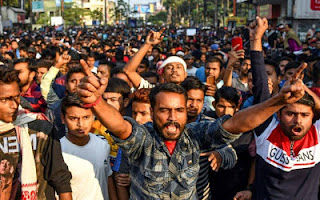 Internet access was cut in India's northeastern city of Guwahati on Friday as thousands gathered for fresh protests against a new citizenship law, a day after police shot dead two demonstrators.

Protests erupted this week after the government introduced new legislation that many in the far-flung northeast believe will give citizenship to immigrants from neighbouring Bangladesh, and which other critics say is anti-Muslim. On Friday morning thousands gathered in central Guwahati as riot police looked on, with residents hurrying out to buy essentials.

No fresh violence was reported but Guwahati and other areas remained littered from the detritus of recent days, with some roads blocked by fallen trees, concrete poles, stones and iron railings. Many cash machines have run out of cash and most petrol stations were also shut.

A local government official said that internet access in the Guwahati, the main city of Assam state, had been cut and an AFP reporter confirmed that connections appeared to have been suspended. The Meghalaya state government has also cut off mobile internet, with parts of the capital Shillong brought under curfew since Thursday evening.