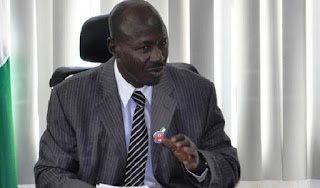 Ibrahim Magu,the Acting Chairman of the Economic and Financial Crimes Commission, EFCC has decried the refusal of the United Kingdom (UK), to extradite former Minister of Petroleum Resources, Diezani Allison-Madueke, to face trial for alleged money laundering in Nigeria.


The EFCC boss disclosed that the Commission had sufficient evidence to prosecute Allison-Madueke for the alleged financial malfeasance she committed while in office.  The looted funds, traced to Allison-Madueke and others, he noted, could be used to keep the wheel of the nation’s economy rolling if recovered.

“We don’t want to keep chasing everybody as a suspect. We want everybody who has stolen from the commonwealth to bring it back to Nigeria, so as to use the monies to provide the needed infrastructure,” he stated, disclosing that the Commission would build more detention facilities and open additional zonal offices so as to bring the anti-corruption fight, nearer home to the people.