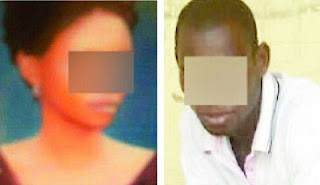 An ex-military officer, Silvanus Kwange has been left in shock after finding out that his son-in-law Christopher Chori. impregnated his second wife, Priscilla Kwange.

According to The Sun, Mr Kwange, a native of Tiv from Taraba State, has been married to Priscilla for about 10 years without a child. He married her after the demise of his first wife. Mr Kwange was advised to send Priscilla packing but Christopher, his son-in-law married to his daughter Faith, advised him against this.

Faith and Christopher who have been married for over four years welcomed their first child in May 2019 but their joy was shortlived as she died a week after from complications from the caesarian section she underwent. Priscilla was told to leave their home in Taraba and move in with Christopher to nurse the baby. One thing led to another and they began having s3x and she became pregnant for him.

Mr Kwange speaking on this said;” I know the importance of her coming to stay in Lafia for some period of time, to take care of the new born baby whose mother is late. I thought it was my own responsibility to help my son-in-law and the new baby of my late daughter. So, I allowed my own wife to come and help. Is that an offence?”