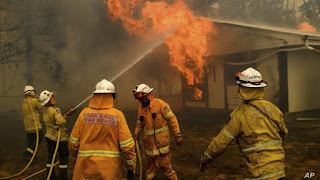 New South Wales Premier Gladys Berejiklian confirmed the deaths and crash in comments to reporters as Australia attempts to deal with an unprecedented fire season that has left a large swath of destruction.

“The only thing I have from the field reports are that the plane came down, it’s crashed and there was a large fireball associated with that crash,” said Rural Fire Service Commissioner Shane Fitzsimmons.

He said all three aboard were U.S. residents. “Unfortunately, all we’ve been able to do is locate the wreckage and the crash site and we have not been able to locate any survivors,” he said.