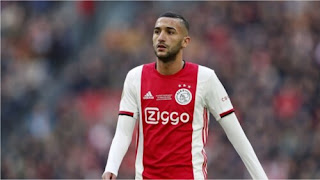 Chelsea have agreed to terms with Dutch champions Ajax over the signing of Morrocan midfielder Hakim Ziyech for a fee reported to be £45 million. A statement by Ajax on their official Twitter page suggested that Ziyech will be moving to Stamford Bridge in the next summer, ending reports linking him to other top clubs in Europe.

The Moroccan emerged a transfer target for Blues following his stellar Champions League performance against Chelsea which ended in dramatic 4-4 draw. With Ziyech deal confirmed, Chelsea have now found a worthy successor for Eden Hazard who departed the club in last summer for Real Madrid after seven seasons.

Frank Lampard's side failed to sign a major player during the January transfer market despite surviving the two-window transfer ban imposed on them by FIFA, but Ziyech arrival will be a massive boost for Chelsea's porous midfield.
on February 13, 2020