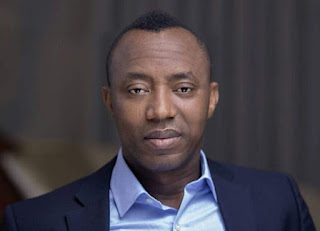 Ijeoma Ojukwu, judge of a federal high court in Abuja has ordered Abubakar Malami, attorney-general of the federation (AGF), to pay a cost of N200,000 to Omoyele Sowore and Olawale Bakare, his co-defendant. The judge said the cost is the consequence of the prosecution’s attempt to delay the trial.

At the court session on Wednesday, Aliyu Halilu, prosecution lawyer, said the charges against the defendants have been amended but that they are yet to be served on them. He asked the court to adjourn the case till Thursday for trial to commence. Olumide Fusika, Sowore’s counsel, opposed Halilu’s request for an adjournment and asked the court to strike out the case for “lack of diligent prosecution”. He said even if the adjournment is granted, the trial cannot commence on Thursday because the prosecution is yet to comply with the order of the court which asks it to furnish the defence with statements of the witnesses they intend to call.

Fusika said the prosecution is more interested in subjecting his client to ridicule than trial. He said Sowore has not seen his family since he was arrested and that if not for “the support of well wishers, maybe he would be sleeping under a bridge”. Sowore’s lawyer also said: “This morning, my colleague Marshal approached Mr Halilu to request if there was anything to be served on us and he gave the impression that there was nothing.”

When asked by the judge, a clerk in the court, said indeed Marshal came to him to inquire if the prosecution had filed new processes. He said he directed the counsel back to the prosecution lawyer. But the prosecution denied the inquiry and asked the judge to reject the submissions of the defendant. Delivering a ruling, the judge said: “The honourable court views the delay as uncalled for and the application for adjournment as frivolous in view of the reasons for the adjournment sought.” “Each party is entitled to five adjournments. The prosecution has almost exhausted her five adjournments even before the commencement of trial. There are consequences for every infraction.

“Premised on the provision of section 396(6) of the Administration of Criminal Justice Act, the prosecution has earned the award of cost against them. Prosecution shall pay a cost of N200,000 to the defence as a consequence of frivolous adjournments.” Sowore and Bakare are standing trial on seven counts of treasonable felony, fraud, cyber-stalking and of insulting the president. Wole Soyinka, Nobel laureate, Shehu Sani, a former senator,  and Chidi Odinkalu were in court to witness the proceedings.