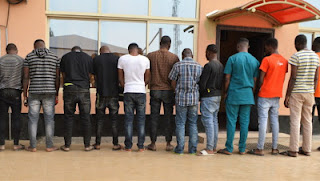 The Economic and Financial Crimes Commission (EFCC) operatives have arrested two siblings and 13 others for alleged Internet-related fraud in Ibadan, Oyo State.

The Acting Head of Media and Publicity for the EFCC, Tony Orilade, said in a statement on Thursday that the suspects, whose ages ranged from 16 to 48 years, were arrested at the Alarara area of the ancient city. According to him, the suspects were apprehended following intelligence gathering by the anti-graft agency on their alleged illegal activities.

Orilade said three exotic cars, phones, laptops, international passports, Point of Sale (POS) machine and some incriminating documents were recovered from the suspects at the point of arrest.  He said the suspects would be charged to court as soon as investigations were concluded.