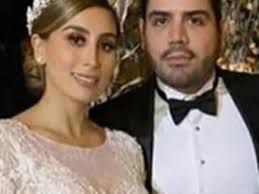 El Chapo's daughter has married a drug baron's nephew at a lavish wedding complete with armoured luxury cars and cartel hitmen as security, it is reported. The jailed Sinaloa cartel boss wasn't there to walk his daughter, Alejandrina Gisselle Guzman, down the aisle - he's serving a life sentence at a US prison dubbed the "Alcatraz of the Rockies".

Alejandrina, 38, and groom Edgar Cazares arrived in armoured SUVs and the cathedral in Culiacan, Mexico, where the Sinaloa cartel is based, was cordoned off with yellow crime scene-like tape.

Instead of sharing a dance with her dad during a night-time bash, Alejandrina - who wore a white dress and a tiara - went for a spin with her mum, Maria, who was Joaquin "El Chapo" Guzman's first wife.