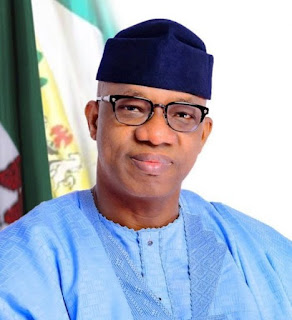 Ogun State Governor Dapo Abiodun, has advised residents of the state to remain calm and not resort to self – help in respect of the late Remo Stars Football Club defender, Kazeem Tiamiyu who was killed by men of the Nigerian Police in Sagamu on Saturday.

While also assuring that similar cases will be looked into, he described the killing of the soccer star as unfortunate and urged  players, management and supporters of Remo Stars Football Club, to remain calm, adding that the killers would be brought to justice.

The Governor, who expressed shock at the tragic event, assured that a proper, transparent and independent investigation would be launched into the incident to know what transpired with a view to bringing those responsible to justice. The Governor eulogised the late player as a young man with great potentials and stated that his government would not take with levity, the safety of lives and property of the good people of Ogun State.

He promised that the incident would not be swept under the carpet, calling on everyone to be calm during the investigation and be confident that anyone found culpable would be brought to book. He also sympathised with the two persons hospitalised as a result of Thursday’s shooting at Olomoore Market, Abeokuta by men of anti-cultism team of Ogun State police Command.

Meanwhile, the Nigeria Football Federation (NFF) has expressed deep grief over the death of the vice chairman of the Rivers State Football Association, Chief and Remo Stars’ players Kazeem Tiamiyu. Omineokuma-Kile died last Thursday while Tiamiyu was killed by men of the Nigeria Police on Saturday.

In a letter signed by the NFF General Secretary, Dr. Mohammed Sanusi, the NFF said it remembered Chief Omineokuma-Kile as “a man of integrity with dignified bearing, as he accomplished his duties quietly and with diligence, both during the Annual General Assembly and in his position as the vice chairman of Rivers State Football Association.

Also at the weekend, the NFF sent a letter of condolence to the Chairman of Ogun State Football Association and NFF Executive Committee member, Alhaji Ganiyu Majekodunmi over the untimely death of assistant captain of Remo Stars Football Club, Kazeem.