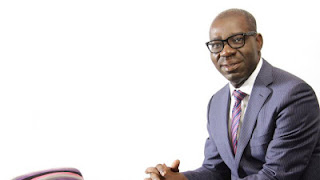 Governor of Edo State, Mr. Godwin Obaseki, has ordered the arrest of one of his former aides, John Mayaki. Mayaki, a Prince from Igarra royal family, was the first Acting Chief Press Secretary to Obaseki at the inception of his administration. He however left the government under unclear circumstances.

According to a statement from the office of the Special Adviser to Governor Obaseki on Media and Strategy, Mr. Crusoe Osagie, “the Police in Edo state weekend contacted the family of John Mayaki in Akoko-Edo local government area, through High Chief J.M. Akpeji, the Otu of Igarra, to submit their son to the police custody failing which the nonagenarian would be arrested.

“The Chief of Staff to the Governor, Mr. Taiwo Akerele, has instituted a case against Mayaki at the State High Court demanding the sum of N100 million while the Governor and his Executive Assistant, Mr. T.J. Nwadie, were reported to have sent a pre-action notice to Mayaki, involving a whopping sum of N500 million.

“Both court actions may not be unconnected with the series of publications embarked upon by the journalist after excusing himself from the Government of Mr Godwin Obaseki as his Chief Press Secretary.”

Reacting to the request, the Otu told journalists that one police officer who identified himself as DSP Moses Nkombe, called his line to demand that he should submit his son to the police the orders of Governor Godwin Obaseki.

But the traditional ruler said he has been unable to get hold of my son who has been out of the country in pursuit of education.

A source in the palace of the Otu of Igarra who spoke in a condition of anonymity, further added that “the police officer went ahead to send John Mayaki’s phone number to his father, telling him to reach his son with the number and compel him to return to the state, threatening to arrest the frail old man if he fails to engineer his son’s return to the country.”

However, a source close to Mayaki, however said: “at the morning hours of 7th February 2020, precisely by 10:44 am, a policeman, DSP Moses Nkombe, from State CID, Benin City, with the phone number — 08034684673 — contacted my brother, ordering his presence at the station over an undisclosed petition from the Governor.

“Prior to this action, the said officer had already called my father, High Chief J.M. Akpeji, the Otu of Igarra, coercing him to provide John Mayaki and/or find a way to compel him to submit himself to their custody.”