Ibrahim freed of drug trafficking in Saudi after 3 years 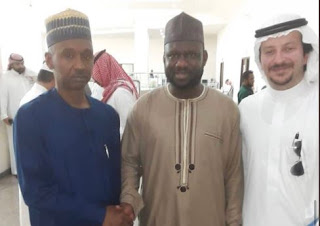 Ibrahim Ibrahim, an indigene of Zamfara State who was locked up in Saudi Arabia has been released. He was locked up for three years on charges of entering Saudi Arabia with hard drugs punishable by death under the laws of that country.

Abike Dabiri-Erewa, Chairman of Nigerians in Diaspora Commission revealed this via her verified twitter handle on Tuesday. Governor Bello Matawalle of Zamfara State had earlier dispatched a delegation to Saudi Arabia comprising of government delegation and a team of lawyers.

The delegation arrived Jeddah with documentary evidence provided by Nigerians in Diaspora Commission for the trial slated for 18/02/2020. The evidence presented at two lower courts freed Ibrahim of the allegation, proving that Ibrahim was wrongly accused.