Lost dog hands himself in to police after missing 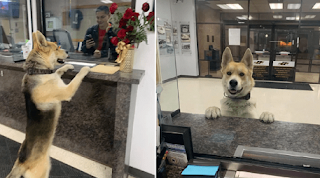 A clever dog has impressed police officers in his local area after alerting them of his own missing status when he ran away from home.

Cops were stunned when Chico the German Shepherd bounded into the station and handed himself in at around 3.30am on February 11. He was wearing a collar but the ID tag had fallen off, so officers called in animal control to check if he had a microchip to identify him.

As they waited for the team to arrive, officers played with the one-year-old dog and showered him in attention. But before animal control arrived, Chico decided he’d been missing long enough and headed home to his sleeping owner, Edward Alvarado, who had no idea he’d even been gone.

Officers at Odessa Police Department, in Texas, were so impressed by Chico they said he deserves a top job on the team.