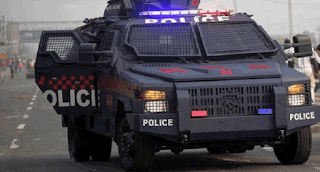 A policeman was crushed to death by a speeding truck along Owerri-Okigwe expressway in Imo State on Wednesday February 12.  The deceased who was identified as Paul Nwachukwu, was attached to silver highway patrol team operating within the Atta area of Ikeduru local government area of the state.

Nwachukwu was reportedly on a stop-and-search duty before the sad incident occurred. An eyewitness said. "He was doing his normal job and when he waved the speeding truck to stop, it ran into him and killed him instantly.

“The truck driver did not stop but other police officers around followed him up.” The State's Police spokesperson Orlando Ikeokwu who confirmed the incident, said efforts to arrest the fleeing driver has been intensified.