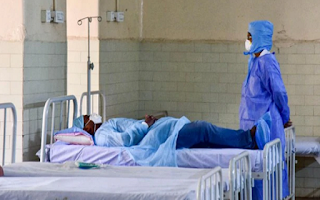 Two men who were declared wanted for having contact with Nigeria’s first coronavirus case have been found, the Lagos State government said on Wednesday.

The duo – Enwelunta Obumnore Godfrey and Salami Abiodun Sadeeq – boarded the same flight that brought the Italian that tested positive to coronavirus in Lagos. They were declared unreachable on Monday after efforts by the state government yielded no effort.

Health Commissioner Prof Akin Abayomi, who gave the update, said the two men were identified within 24 hours after their names were made public. He said: “As you know, we published their names and within 24 hours, we identified them and we’ve been in touch with them. I thank the media for putting those names out and for social media, it was very quick. It shows that the Lagos community is responsive and very responsible because I was surprised at the speed they were identified.”

Abayomi said the Italian who has been in isolation for about two weeks and the second index case have doing very well. He added that the three persons in isolation from France, England, and China have been discharged after testing negative to the virus. The commissioner said: “He (the Italian) has no symptom, but the test shows that he’s still secreting the virus, although the level is going down significantly.

“So, if the virus secretion hits zero, we will test him one more time to be sure and he will be discharged from the hospital. The second case is doing well. He hasn’t developed any major symptoms; just some minor aches and pains and he seems to be doing well and we are satisfied. We will repeat his test tomorrow and we will determine what happens next based on his test.”