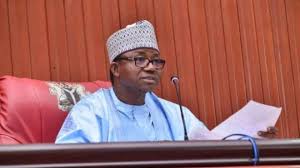 Edo state government says Frank Okiye, speaker of the state house of assembly, has tested positive for coronavirus. Philip Shaibu, the deputy governor, announced this during a press conference in Benin, the state capital, on Wednesday.

He said the speaker is the recorded case announced earlier by the state government. Shaibu said the speaker returned from the UK and went into self-isolation immediately after he retired to his country home in Uromi.He said Godwin Obaseki, governor of Edo, is also in self-isolation following reports of Abba Kyari, chief of staff to the president, and Bala Mohammed,  Bauchi governor, testing positive for the disease.

“The index case of coronavirus in Edo State, is the Speaker of Edo State House of Assembly, Rt. Hon. Frank Okiye. He travelled to United Kingdom, he came back and went into self-isolation. He sent his sample for testing and it came out positive,” he said.

“He is in stable condition. His family members have also been tested and the tests came out negative. “The interesting thing about it is that, since when he entered Nigeria, he avoided everybody and he has been putting on face mask, he avoided touching his own vehicle and he went straight into self-isolation.

“In fact, he prepared his isolation centre before he returned from London, he asked his wife to prepare a room for him where he was going to isolate. He actually avoided everybody. The only two persons he had direct contact with were his wife and daughter and they have been tested and fortunately, they tested negative.