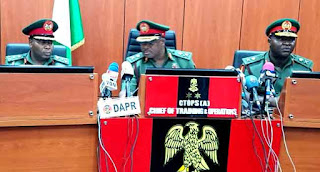 The Nigerian Army has arrested soldiers in a viral video who threatened to forcefully sleep with women in Warri, Delta state and infect them with HIV over the killing of their colleague. The video which had trended on social media recently was vehemently condemned by Nigerians.

In response to the condemnation, the Army announced the arrest on its Twitter handle on Friday, April 3. "Soldiers in a viral video using uncouth and uncivilized language purportedly threatening to molest women in Warri Delta State were arrested at 9 Brigade Ikeja Military Cantonment Lagos State today 3 April 2020 and further investigation is ongoing," the Army wrote in a tweet. Legi Read more:
LOCAL NEWS