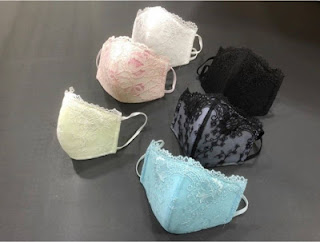 Bra-shaped face masks in Japan sold out minutes after launch. Recently, bra-cup face mask memes surfaced online and went viral but a Japanese company decided to make them a reality and they sold out almost instantly.

Atsumi Fashion, an apparel manufacturer in the city of Himi, Toyama Prefecture that specialises in women’s underwear garments decided that applying the same design to face masks wouldn’t be such a bad idea.

According to SoraNews24, though the lace bra face mask started out as a joke the company underestimated Japanese consumers appetite for ingenuity and sexy underwear. The prototype Atsumi Fashion originally showcased got a lot of attention online.
FOREIGN NEWS