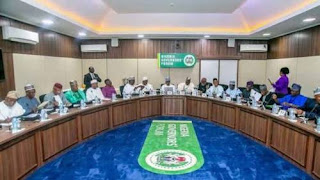 A group, Oodua Youth Coalition, has condemned the decision of the 36 state governors across Nigeria to institute a further two-week national lockdown in the country in order to curtail the spread of Coronavirus.

The group said any attempt to force the people to remain indoors without adequate preparation for their welfare and well-being shall be resisted. The 36 state governors had on Wednesday recommended a national lockdown for another two weeks in addition to the almost elapsing four-week lockdown in Lagos, Federal Capital Territory and Ogun State to deal with the pandemic.

According to Governor Kayode Fayemi of Ekiti State, who made the announcement, the inter-state lockdown became necessary following the continued rise in the number of infected persons and fatalities in the country.

In a statement by its President, Oluyi Akintade Tayo, and Publicity Secretary, Ajongbolo Oluwagbenga, the OYC said it was disheartening that the governors could agree to lockdown in their respective states without recourse to how the people had been living in hunger since the partial lockdown.

The statement reads, "Save for Ondo and Oyo states, the remaining four states in Yoruba land have been on total lockdown for weeks now and the resultant effects are clear to the blind.  "In Lagos and Ogun, criminals are having field and free days terrorising the people and looting their properties.

"Every night, hungry and angry Nigerians, who should be sleeping soundly in their homes, have turned emergency vigilantes while the ones indoors only sleep with one eye closed. "Unfortunately, there are reports of unreasonable and unnecessary attacks on innocent citizens by security men stationed on major roadblocks in towns and highways. "It was also reported that the Nigerian Security Forces have killed more person than the Coronavirus itself.”

The OYC observed that the palliatives being shared around by political office holders and government officials were ridiculous and cannot sustain the people.  According to the group, a further lockdown could lead to chaos in the country that government may not be able to curtail.