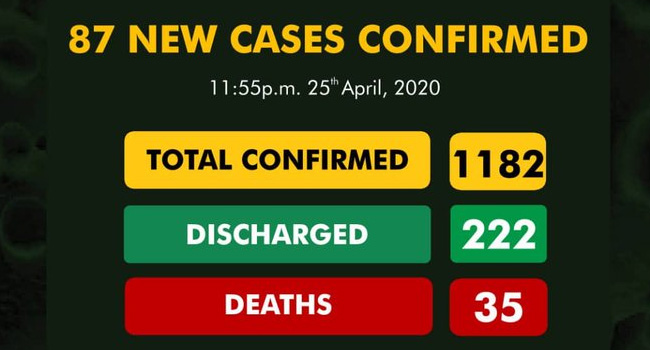 Nigeria on Saturday recorded 87 new cases of the novel coronavirus, bringing the country’s total infections to 1,182 , according to the Nigeria Centre for Disease Control (NCDC).

According to the NCDC in a tweet via its official handle, 33 of the new infections were recorded in Lagos, 18 in Borno, 12 in Osun, nine in Katsina, four each in Kano and Ekiti, three each in Edo and Bauchi and one in Imo. The country’s total deaths from the virus now stand at 35 while 222 have recovered.

The new coronavirus has claimed at least 200,736 lives since its outbreak in China in December, according to a tally from official sources compiled by AFP at 1900 GMT on Saturday. More than 2,864,070 cases were registered in 193 countries and territories. Of these cases, at least 772,900 are now considered recovered.

The tallies, using data collected by AFP from national authorities and information from the World Health Organization (WHO), probably reflect only a fraction of the actual number of infections. Since Friday evening, 6,813 new deaths and 93,320 infections were recorded worldwide. The United States, the worst-hit country, registered 2,710 of those deaths, Britain 813, and Italy 415.